Information on the Federal Bridge Law

The Federal Bridge Law Formula establishes the max weight any set of axles can legally carry on the Interstate roadways. It is also just the mathematical formula used to determine the appropriate weight of loads based on their axle configuration (number of axles, axle spacing, weight distribution). The formula is as follows:

The weight of groups of two or more axles must be checked against the bridge formula to ensure that they meet Federal weight limit requirements and that the allowable gross and axle weights are correlated with the spacing and number of axles to prevent severe overstressing of highway bridges.

Compliance with bridge formula weight limits may require axle weights lower than the standard Interstate System weight limits of 20,000 pounds for a single axle and 34,000 for a tandem axle set. It may also require a gross weight lower than the standard 80,000-pound Interstate System limit. Weight allowed under the bridge formula can be increased up to these limits by adding axles or positioning them farther apart. 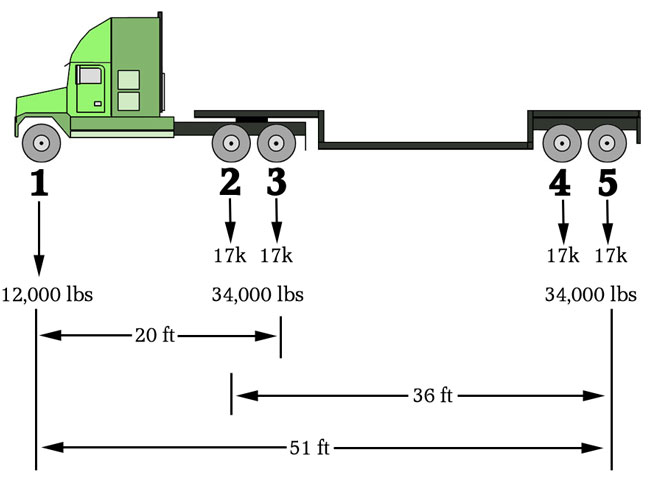 The actual weight of axles 1 through 3 in the example combination is 46,000 pounds so the bridge formula requirement is satisfied.

To use the Bridge Formula Table to obtain the maximum load allowed on axles 1–3, read down the left column (Distance in feet between…axles) to L = 20 and across the number of axles to the right to N = 3 (axles).

Now check axles 1 through 5 using the illustration and table.

Now check axles 2 through 5 using the illustration and table.

W maximum from the table for L = 35 feet and N = 4 (axles) = 65,500 pounds. This means the illustration shows a violation; the actual weight of 68,000 pounds exceeds the maximum allowable weight of 65,500 pounds for the given axle spacing. To correct the situation, some load must be removed from the vehicle or the 35-foot axle spacing must be increased.

There is one exception to the use of the formula and table: two consecutive sets of tandem axles may carry a gross load of 34,000 pounds each—providing the overall distance between the first and last axles of such consecutive sets of tandem axles is 36 feet or more. For example, a 5-axle tractor-semitrailer may be used to haul a full 34,000 pounds on the tandem of the tractor (axles 2 and 3) and the tandem of the trailer (axles 4 and 5), providing there is a spacing of 36 or more feet between axles 2 and 5. A spacing of 36 feet or more for axles 2 through 5 is satisfactory for an actual W of 68,000 pounds even though the formula or table computes W maximum to be 66,000 to 67,500 pounds for spacing’s of 36 to 38 feet. This special exception is stated in the Federal law.

The following definitions are used in conjunction with the Bridge Formula Table.

Gross Weight:
The weight of a vehicle combination without load plus the weight of any load thereon (The Federal gross weight limit on the Interstate System and reasonable access thereto is 80,000 pounds.)

Single Axle Weight:
The total weight transmitted to the road by all wheels whose centers may be included between two parallel transverse vertical planes not more than 40 inches apart, extending across the full width of the vehicle (The Federal single axle weight limit on the Interstate System and reasonable access thereto is 20,000 pounds.)

Tandem Axle Weight:
The total weight transmitted to the road by two or more consecutive axles whose centers may be included between parallel vertical planes spaced more than 40 inches and not more than 96 inches apart, extending across the full length of the vehicle (The Federal tandem axle weight limit on the Interstate System and reasonable access thereto is 34,000 pounds.)

Consecutive Axle Weight:
The Federal law states that any consecutive two or more axles may not exceed the weight as computed by the formula even though the single axles, tandem axles, and gross weights are within the legal requirements.